skip to main | skip to sidebar

The Last Full Measure of Devotion

Philip Prince's https://wishofalifetime.org came about due to a weight he'd carried from the moment his brother Palmer died.  Philip was in basic training at the time and could not come home for his brother's service.  The inability to properly pay his respects to his brother was something that Philip carried with him throughout his exemplary life.  I will never forget the moment that Philip threw the wreath into the water off the coast of Okinawa at the coordinates where his brother’s remains had been laid to rest. Philip had carried that weight on his shoulders for 67 years.  The weight came off before my eyes, reminding me of the types of things that really matter to us. No matter how old we are, there are always things that are important to us. Being with Philip that day was one of the most meaningful moments of my life. 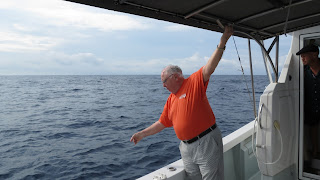 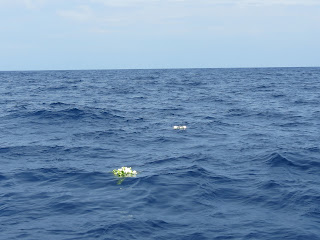 Our trip had come full circle and on our last full day in Okinawa it was appropriate that we visited Kadena Air Force Base.  Major Christopher Anderson and Casey Connell gave us a tour of the base and made us feel at home.  We both continued to learn a lot.  I think that it had only been more helpful to Philip and myself to see the ultimate impact of Palmer’s service to his country.  Kadena is the largest Air Force installation in the Pacific and home to the 18th Wing, the largest combat air wing in the Air Force.  As we were there, we were reminded of the impact of this base as the Chinese and Japanese postured over a couple of islands nearby.  In today's world, the importance of this base can not be overstated.

Major Anderson and Mr. Connell first took us to see a place where the Japanese had hid kamikaze planes prior to the invasion of Okinawa.  These were not the planes that hit the USS Hyman, but that didn’t really matter.  You could see the meaning on Philip’s face as we bent over to look inside the concrete shells that had once housed kamikaze planes. 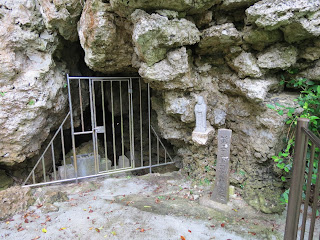 From there we drove to the spot where the Japanese surrendered in Okinawa in September of 1945.  As we learned at the Okinawa Prefectural Peace Memorial Museum, the Okinawan people do not speak of war, they speak only of peace.  It is unfortunate, but true, that we still live in a world where peace must still be accompanied by a military.  The fact that Major Anderson was Chief of Public Affairs for the 18th Wing and that Mr. Connell was one of their historians, told me the importance that our military places on this.  Those that refuse to acknowledge history, are destined to repeat it. 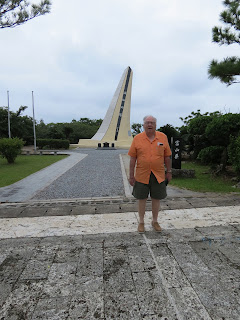 Eighty three years ago, Hugh Palmer Prince joined the Navy.  Subsequently, his three brothers, Eugene, David and Philip, would join the army.  Eugene would get a medical discharge.  David would serve in Europe and was badly injured after the Battle of the Bulge.  Philip would have been part of the invasion of mainland Japan if not for the dropping of the bombs and the Japanese surrender.  Four brothers served their country, three came home and continued to serve their country in various ways.

Philip’s brother Eugene joined the Army but was medically discharged during basic training due to rheumatic heart disease.  He graduated from the University of Tennessee in Engineering and worked for the Clinchfield Railroad.  Later he went on to work for the Richmond-Fredericksberg & Potomac Railroad.  He passed away in 1988.

Philip’s brother David served in the 78th Division which went through England, France, Belgium and Germany. He was the recipient of the Bronze Star, three Battle Stars, and the Purple Heart where he was wounded by a mortar shell after the Battle of the Bulge. As he was being evacuated, a German plane strafed the vehicle he was in.  He returned to go to Wofford College, then went on to receive his PhD from the University of North Carolina.  He then became a Professor at Wofford College where he ultimately served as Chairman of the Education Department.  He passed away in 2005.

Philip lived an exemplary life.  From the very moment he set foot on the Clemson campus in 1944, his heart was with the Clemson Tigers.  In 1994, Philip stepped up to take the reins as the 12th President of Clemson University.  The organizational changes that he instituted in only one year still stand. He became a tireless fundraiser for the University.  He raised funds for a large endowment, and continued to work on raising additional funding, recognizing the ongoing decrease in state funding.  His legacy will continue, as both of his grandsons attended Clemson.  Philip died February 28, 2020.

Hugh Palmer Prince, gave the last full measure of devotion to his country.  Through the auspices of the Wish of a Lifetime Foundation (https://wishofalifetime.org). Philip was able to pay his final respects to his brother.  I not only made a new friend, but continued to learn.  As Philip saw over our week together, I love to ask questions.  As a physician, I often say that I learn every day how little I know.  As a human being, I feel the same way.  Getting to know our elders and trying to learn from them is one way for all of us to grow.  In this way, Palmer’s legacy will always continue. 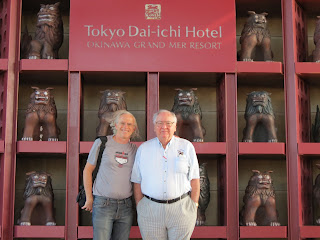 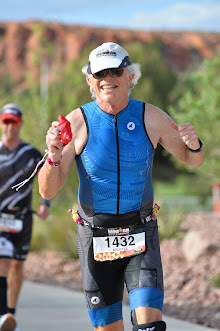 Wassdoc
I'm a reformed couch potato, who had never run a mile prior to turning 32. I then proceeded to do 9 marathons in the next seven years, started doing some triathlons and got a herniated disc. I was never very fast, but got a coach in 2005 and haven't looked back. Triathlon is a lifestyle to me, and allows me to show others that one can get stronger, fitter and faster even as they get older!